Top Ten Things to Do When Visiting Budapest

If you’re looking for the perfect location for your next vacation, look no further. Budapest is one of the most affordable and beautiful cities in Europe. In the heart of Europe, you will find our beautiful capital city filled with opportunities and places to visit.

Visiting Hungary and Budapest, in general, is getting more and more popular. It’s not a surprise because Budapest is one of the most beautiful and affordable places in Europe. No question why so many visitors come here every year. In this article, we’ll describe ten places you need to visit in your time in Hungary. These locations could be interesting for locals as well.

For the ease of naming, I will call it Gellért Hill. The Gellért Hill is a 235 m (771 ft) high hill overlooking the Danube in Budapest, Hungary. It is located between the 1st and the 11th districts. The hill was named after Saint Gerard, who was thrown to death from the hill. The famous Hotel Gellért and the Gellért Baths can be found in Gellért Square at the foot of the hill, next to Liberty Bridge. The Gellért Hill Cave is also located on the hill, facing the hotel and the Danube.

It is the perfect location for couples and families, but if you visit Budapest alone, it’s a great challenge to climb the stairs by yourself. The hill is filled with small locations that give you a beautiful overview of the Pest side of Budapest. At the top of Gellért Hill is the famous Liberty Statue, which is currently under construction at the writing of this article. Gellért Hill is a must-visit place regardless of the season.

Margaret Island is a 2.5 km long, 500-meter wide island in the center of Budapest. The island is located between Buda and Pest, in the middle of the Danube. The island is mostly covered by landscape parks and is a popular recreational area. Its medieval ruins are reminders of its importance in the Middle Ages as a religious center. The island spans the area between the Margaret Bridge (south) and the Árpád Bridge (north). 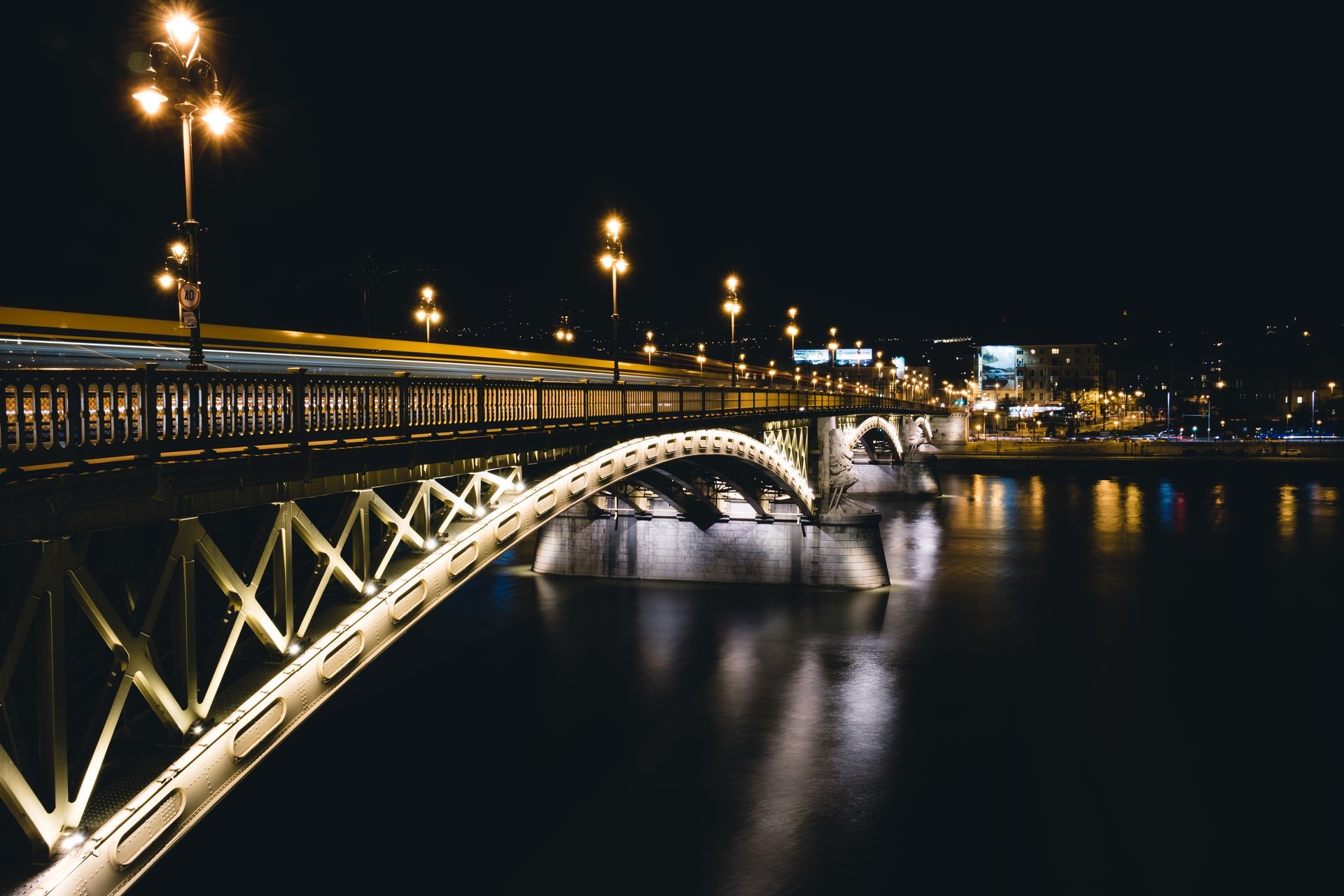 Margaret Bridge at Night by BENCE BOROS on Unsplash

Nowadays, the island is full of opportunities. From baths to sports centers, you will find something that you love. If you like running with a view, the island has a dedicated running track on its side, so you can run around the island while admiring Budapest. For people interested in good drinks, the island is full of bars in the middle. If you are looking for a romantic place, you can find many locations where you can enjoy each other’s company.

Visit the House of Parliament

We can say without any exaggeration that the Parliament of Hungary is one if not the most beautiful in the world. If you see it in person, you will understand. No matter if you take a short journey on Kossuth Square – where the Parliament is located, or take a guided tour inside the building, visiting the Parliament is a must-have thing to do. 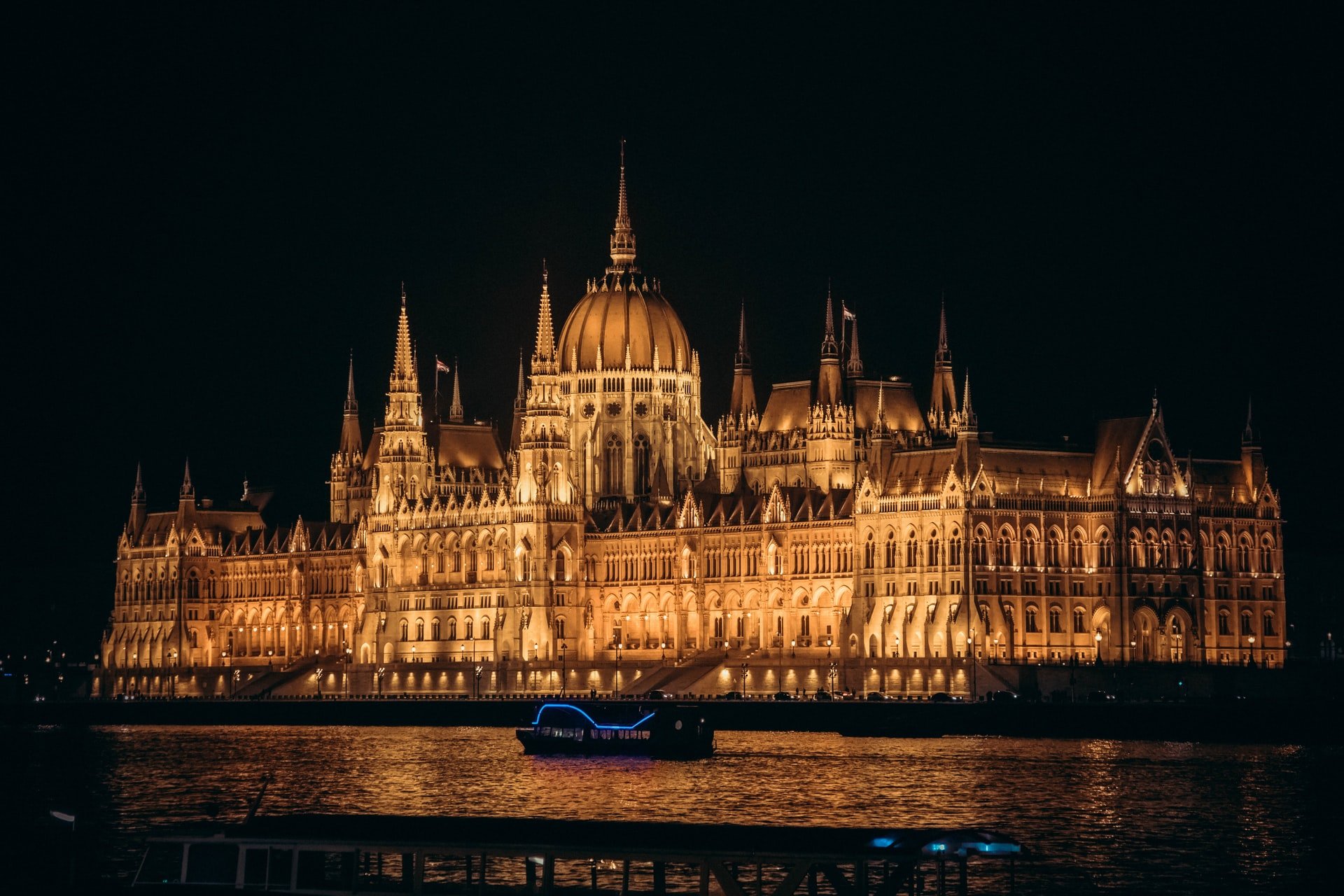 House of Parliament Budapest by Vianney CAHEN on Unsplash

History of the House of Parliament

We don’t want to get too technical here with the history of the Parliament, but some things can’t be ignored without a mention.

First, let’s set things straight: the word “parliament” actually refers to the body that assembles in the House of Parliament. Although many call this fascinating building the Parliament, the correct name is the House of Parliament. Building this impressive structure took 17 years, from 1885 to 1902, based on the design by the architect Imre Steindl. Unfortunately, the designer himself did not live to see the inauguration, since he died five weeks before.

House of Parliament Budapest by Lachlan Gowen on Unsplash

A vital obligation for the construction was that only Hungarian raw materials could be used for building the Hungarian Parliament and that it must involve Hungarian craftsmen and manufacturers. These terms were fulfilled, with only the gigantic granite columns imported from abroad. (Only 12 of these columns have ever been made in the world – eight are in the House of Parliament, while the other four are in Britain.)

Some astonishing figures: roughly 40 million bricks were used for the construction, while about 40 kilograms of 22-23 carat gold embellish the Parliament. The floor area of the building is 18,000 square meters; 90 stone statues adorn the facade, and there are around 162 more figures inside. The red carpet inside is almost 3 km long; you can enter through a total of 27 gates, and 365 towers of varying sizes, one for each day of the year, rise from the Hungarian Parliament.

Taking a ride with the Zugliget Chairlift is one of the coziest things to do while being in Budapest. The tickets are super affordable, yet the experience is priceless. 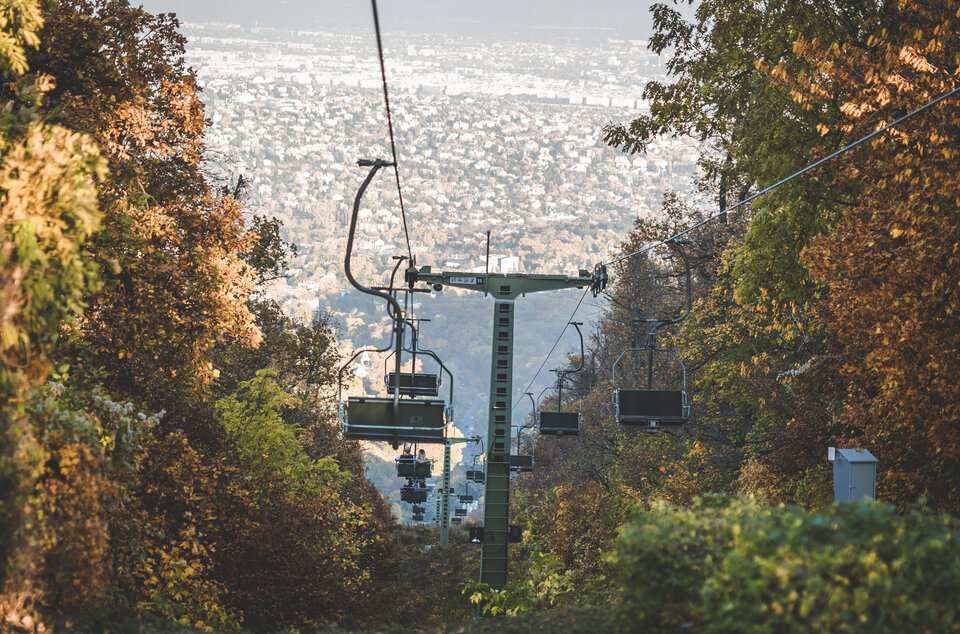 A little history and details about the Zugliget Chairlift. The Chairlift was built in 1970. The cable-railway connects Zugliget and János Hill in the 12th district of Budapest. The line of the Chairlift is 1040 m long; the level difference is 262 m between the 2 stations. The journey time is 15 minutes in both directions. You can read more about the Chairlift here.

Photo by Krisztian Tabori on Unsplash

If you love fresh goods, people watching, shopping, photo opportunities, guided tours with tastings, or just sightseeing in amazing places, we know you will enjoy visiting our beloved Great Market Hall. No matter if it rains or shines, the Great Market Hall is a great option, and one of the top Budapest attractions according to many Budapest guides.

If you want to have a different perspective from our beloved capital city, one of your best chances is to hop on a boat. Lucky for us, there are a dozen types of options, from party or restaurant boats to public transportation boats. You will find one that suits your need. Don’t miss this if you are visiting Budapest. One thing to keep in mind is that the schedule of the boats above may vary depending on the day and season you visit Budapest.

Hopping on tram 2 is one of the most beautiful and cheapest ways of sightseeing in Budapest, as it goes along the Danube riverbank, conveying you past the iconic buildings from Jászai Mari tér to the National Theatre. And all of this costs the price of a BKK ticket (roughly €1) – or two if you want to do the return journey. 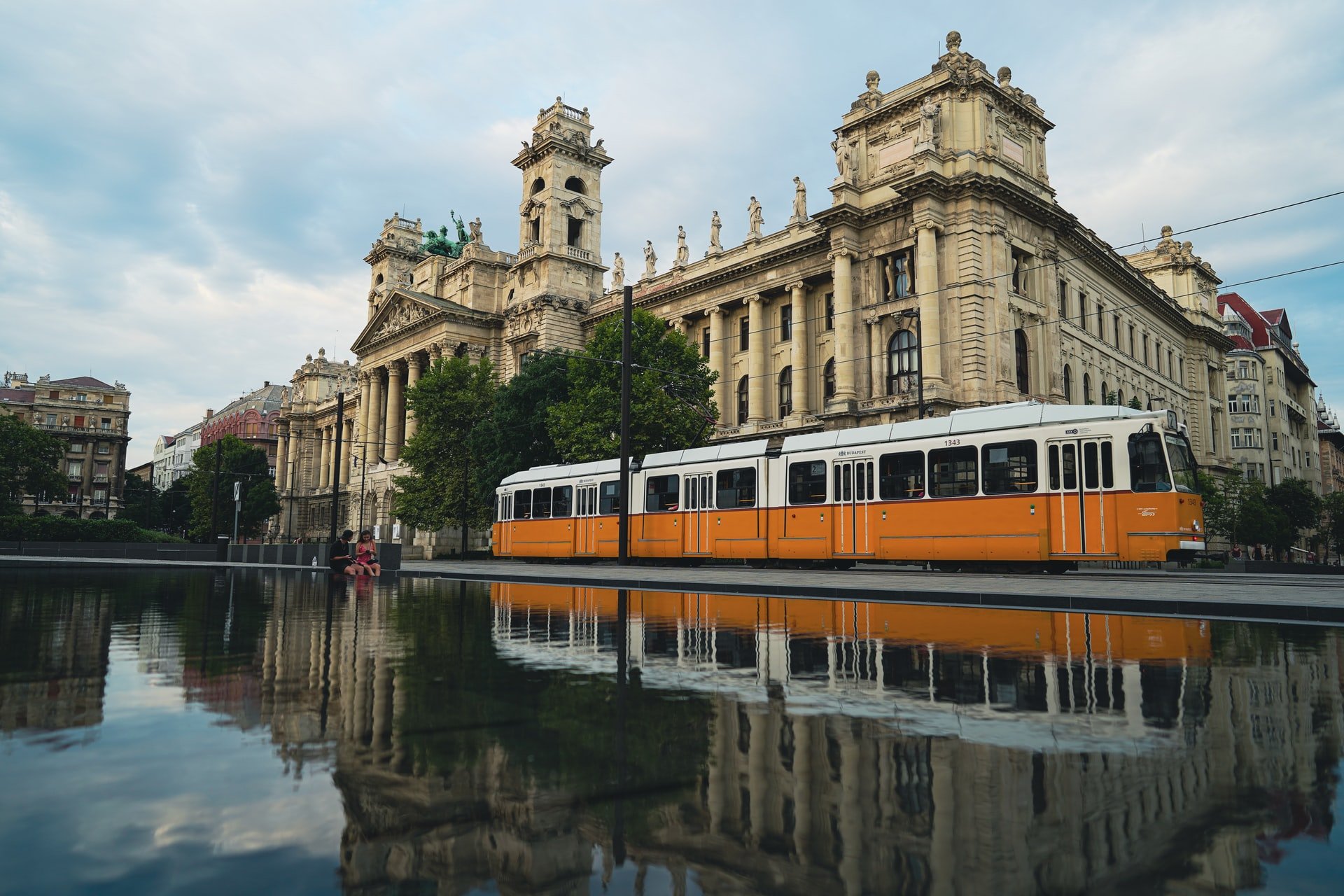 Photo by Ilya Panasenko on Unsplash

Look to your left and right when going in either direction as the tram goes by Parliament, the Gresham Palace, Chain Bridge, and under Elizabeth Bridge. On the other side of the Danube, the Buda Hills can be seen as well as the Castle District and Gellért Baths. Tram 2 is not the only communal transport that provides an alternative way of exploring the city – MOL Bubi and BKK boat services open new possibilities, too.

We’ll describe the Buda Castle in a separate article in more detail as there are so many things to do and see there. For now, we cover the basics.

Buda Castle is the historical castle and palace complex of the Hungarian kings in Budapest. It was first completed in 1265, but the massive Baroque palace today occupying most of the site was built between 1749 and 1769. The complex in the past was referred to as either the Royal Palace or the Royal Castle. The castle now houses the Hungarian National Gallery and The Budapest History Museum. 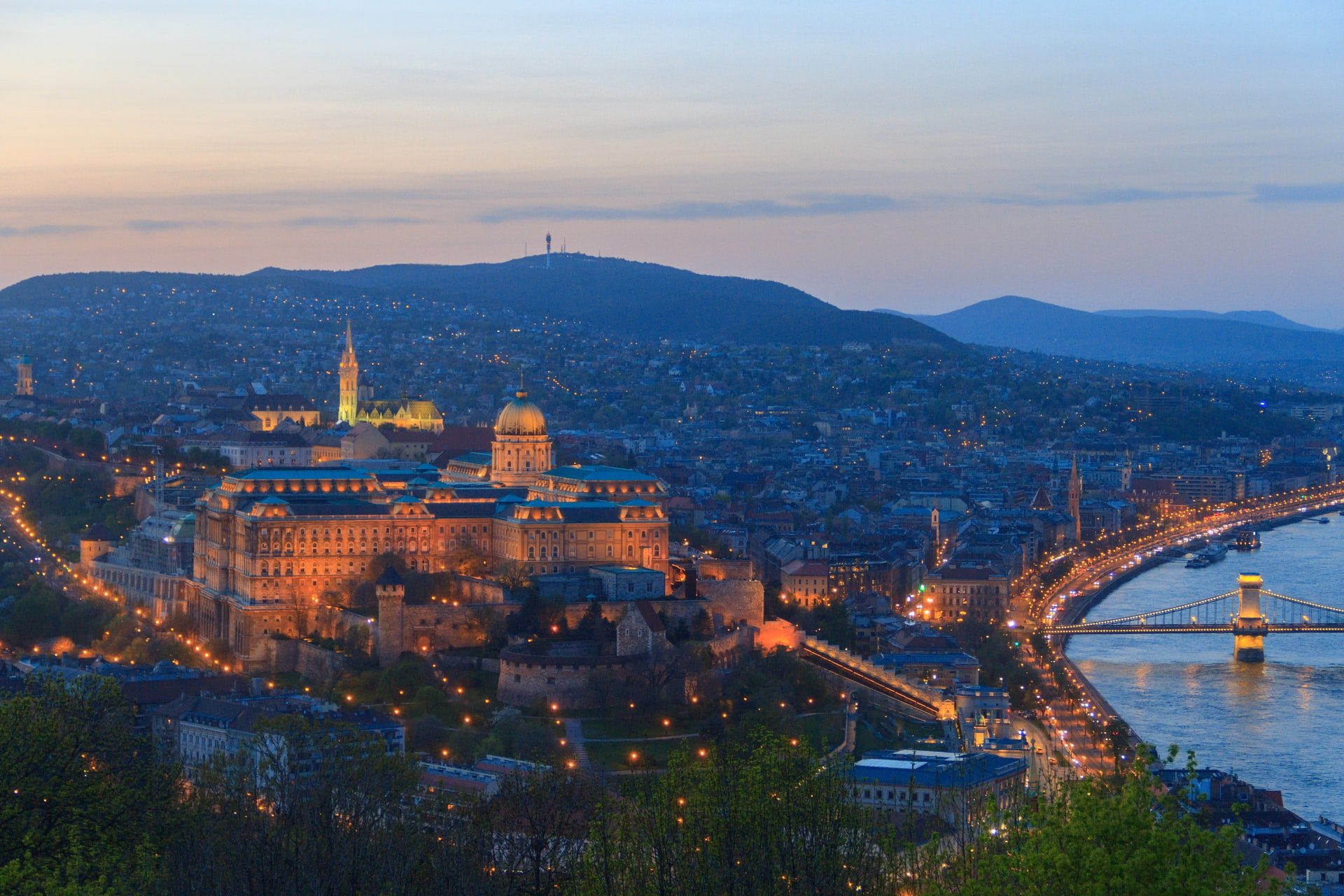 Buda Castle at Night Captured by Henrique Ferreira on Unsplash

Buda Castle sits on the southern tip of Castle Hill, surrounded by the touristic area known as Várnegyed (Castle Quarter), which is famous for medieval, Baroque, and Neoclassical houses, churches, public buildings, and monuments. The hill is linked to Clark Ádám Square and the Széchenyi Chain Bridge by the Castle Hill Funicular. The castle is a part of the Budapest World Heritage Site, so declared in 1987. The original Royal Palace was ruined during WWII, it was rebuilt in a simplified Stalin Baroque style during the Kádár era.

Nowadays the Castle Quarter and the Buda Castle is a famous tourist attraction. Don’t miss it when you visit Hungary.

Buy Yourself a Drink and Simply Sit on the Rakpart (Quay)

If you are looking for the cheapest program in Budapest, buy your favorite drink and walk down to the Quay. Locals do it regularly as it is a stunning view. Either you sit on the Buda or Pest side of the Quay, the scenery is simply beautiful to watch. We only recommend this in summer, as it can get windy and cold next to the river Danube. 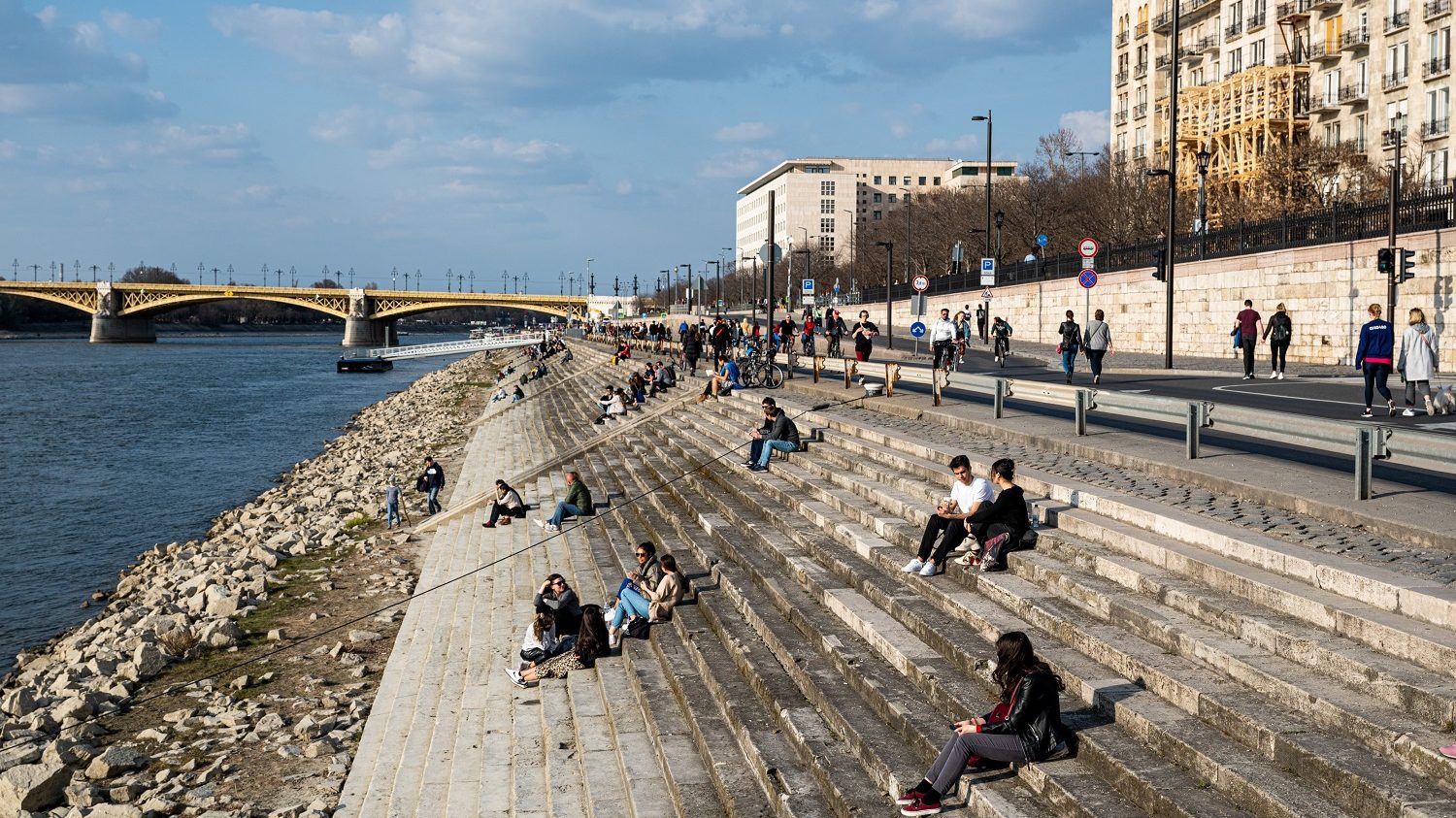 Visit One of Our Thermal Baths

If you are looking for the perfect way to relax, we recommend you to visit one of our thermal baths. 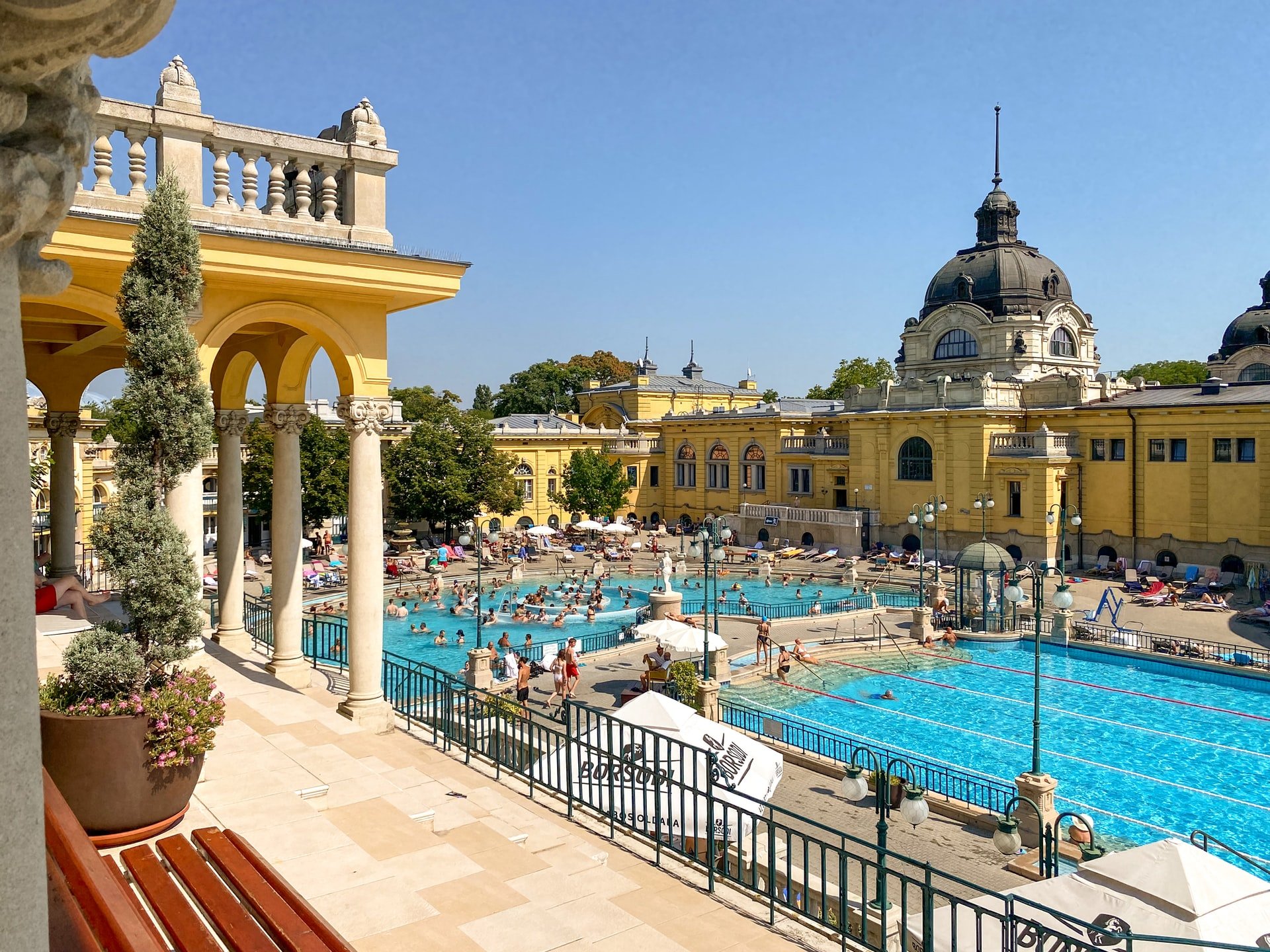 For thousands of years, locals have enjoyed the steaming, mineral-rich thermal water simmering beneath Budapest’s surface. For example, the remains of the Roman-era public baths, Thermae Maiores, are still visible in today’s northern Budapest. The Ottoman Empire, after taking the city in the 16th century, was particularly fond of the hot springs of Budapest and some of the hammams they built are still functional today (Rudas, Király, Veli Bej).

308 GTB/GTS – A Piece of Italian History

© 2021 The Midway Gentleman | All rights reserved. Midway Gentleman participates in various affiliate marketing programs, which means we may get paid commissions on editorially chosen products purchased through our links to retailer sites.

We use cookies on our website to give you the most relevant experience by remembering your preferences and repeat visits. By clicking “Accept All”, you consent to the use of ALL the cookies. However, you may visit "Cookie Settings" to provide a controlled consent.
Cookie SettingsAccept All
Manage consent

This website uses cookies to improve your experience while you navigate through the website. Out of these, the cookies that are categorized as necessary are stored on your browser as they are essential for the working of basic functionalities of the website. We also use third-party cookies that help us analyze and understand how you use this website. These cookies will be stored in your browser only with your consent. You also have the option to opt-out of these cookies. But opting out of some of these cookies may affect your browsing experience.
Necessary Always Enabled
Necessary cookies are absolutely essential for the website to function properly. These cookies ensure basic functionalities and security features of the website, anonymously.
Functional
Functional cookies help to perform certain functionalities like sharing the content of the website on social media platforms, collect feedbacks, and other third-party features.
Performance
Performance cookies are used to understand and analyze the key performance indexes of the website which helps in delivering a better user experience for the visitors.
Analytics
Analytical cookies are used to understand how visitors interact with the website. These cookies help provide information on metrics the number of visitors, bounce rate, traffic source, etc.
Advertisement
Advertisement cookies are used to provide visitors with relevant ads and marketing campaigns. These cookies track visitors across websites and collect information to provide customized ads.
Others
Other uncategorized cookies are those that are being analyzed and have not been classified into a category as yet.
SAVE & ACCEPT
Menu
Menu